This research guide gives information on the Laguna Madre and our relationship with it. The purpose of this research guide is to offer students historical context though access to primary and secondary source materials at UTRGV University Library, including Special Collections & Archives, as well as highlighting other resources available externally.

The Laguna Madre is a unique ecosystem that is one of the six hypersaline lagoons in the world. The Laguna Madre is also an estuary, “a partially enclosed coastal body of brackish water with one or more rivers or streams flowing into it, and with a free connection to the open sea,” to the Rio Grande River. Many species of flora and fauna call the Laguna Madre their home, but human activity over the years has had a major impact. The water portion is a delicate ecosystem that spans 280,910 acres, yet it is less than a meter deep in most places. The Laguna Madre, and by extension South Padre Island, is a natural barrier between mainland Texas and the Gulf of Mexico. There are different sections of the Laguna Madre that play a role and contribute to wildlife. 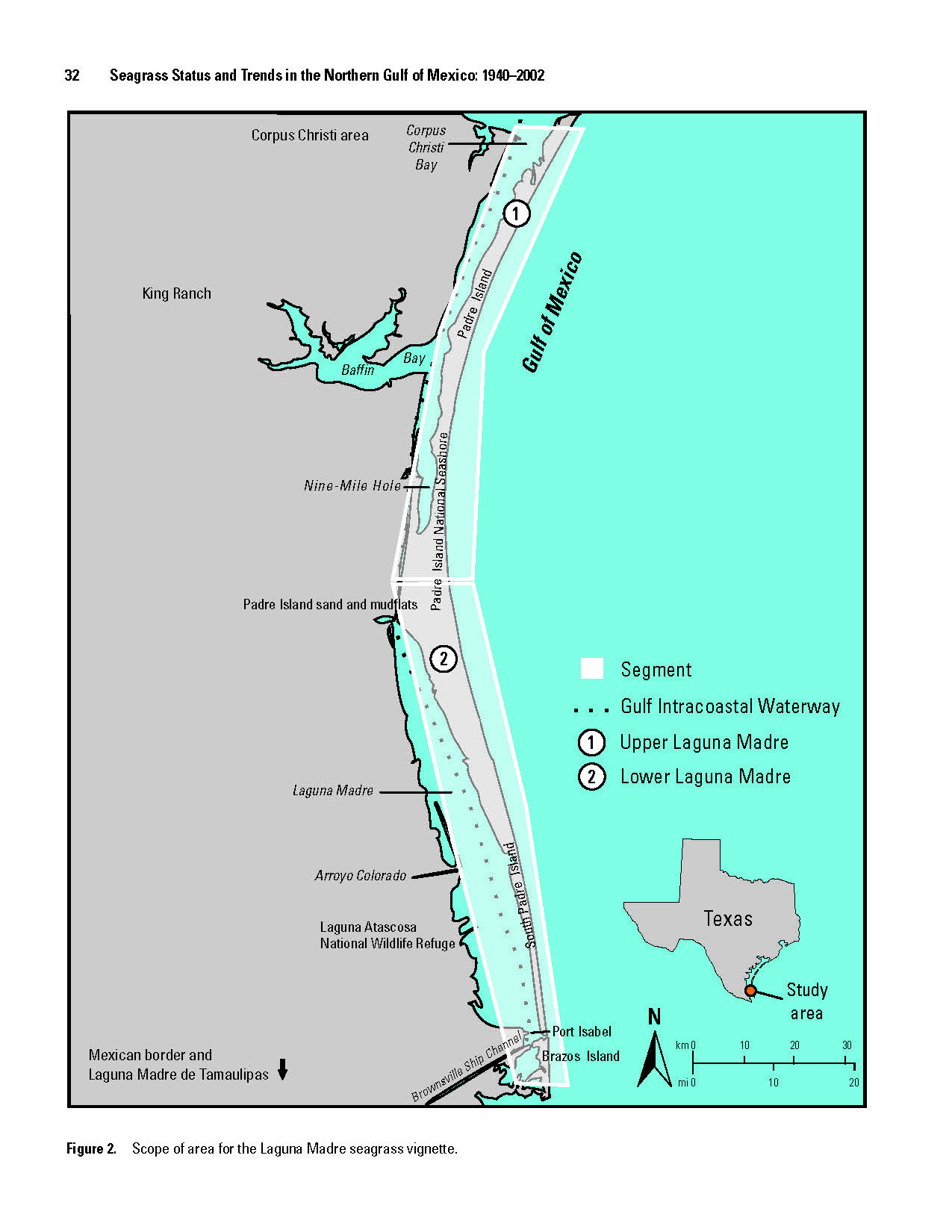 Key Features of the Laguna Madre

The Lower Laguna Madre (LLM) extends from the Saltillo Flats “to within 5 km (3 mi) of the Mexican border." While the LLM does not have any bays that have formed, it has the Arroyo Colorado, a distributary from the Rio Grande River. The Arroyo Colorado brings irrigation water from agriculture and the few inlets near Port Isabel. This area also has more coverage of seagrasses (37% in the Lower Laguna Madre, compared to 63% in the Upper Laguna Madre in 1998), but over the years it has dramatically decreased in both sections. The main reason for loss of seagrass has been attributed to dredging, the excavation of materials in a water environment, for commercial use and the reshaping of the land.

The Upper Laguna Madre (ULM) extends from Corpus Christi to the Saltillo Flats and has Padre Island as its barrier to the Gulf of Mexico. In the Upper Laguna Madre, there are four bays: Baffin Bay, Alazan, Cayo de Grullo, and Laguna Salada. No major rivers converge on the ULM, therefore, the salinity is driven by annual rainfall, and the hypersalinity comes from water evaporating more than precipitating. The only connection to the Gulf of Mexico is the Packery Channel, which allows new water to inflow slowly. The UPL formed because of the melting of glacial ice 18,000 years ago. The valleys left behind were eventually filled with sediments and water, forming shoals and sandbars 5,000 years ago.

Did you know? Water residence times (i.e., how long water remains within the bay) in the ULM can be as long as one year in areas farthest from a channel.

One of the more notable features of the Upper Laguna Madre are their bays. Baffin Bay is the biggest of the four and centralizes the other three before they flow into the main body of the Laguna Madre. It goes through “high salinity cycles when inflow ceases, and summer and winter temperatures become extreme." These harsh environmental changes through the year make the species that live there hardy and adaptable. Black drum and spotted seatrout are some of the abundant species in this area. The area around the bay is full of clay dunes and sand prairies because it is in the South Texas Eolian Sand Sheet.

From an archaeological perspective, this area has supported life for thousands of years. The most notable site is the Laureles site (41KL71), which has evidence of “oyster harvesting…before 2,000 B.C.” through radiocarbon dating by Robert Ricklis in the 1990s. The earliest occupation we know of is about 3300-3900 B.C., where hearths were found with clay, whelk, conch, and scallops. At this time, the barrier islands had not formed yet, so the hypersaline conditions were not present. There are also other sites on Caylo del Grullo and Alazan Bay, which “yielded several radiocarbon dates 2,000-2,200 years ago." Many of the remains found at these winter fishing sites belong to black drum, rather than the shellfish at the Laureles site. 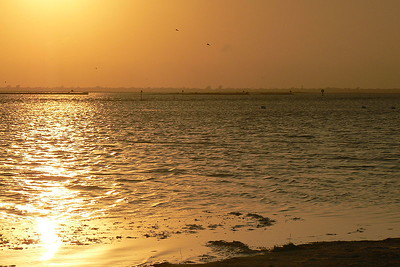 Baffin Bay is an inlet of the Lagune Madre featured above.
Photo Credit: Terry Ross | Flickr

The Lower Laguna Madre is connected to the Bahia Grande, a “6,500-acre tidal basin located in southeastern Cameron County” that is a restored wetland. It is surrounded by State Highway 100, the Brownsville Ship Channel, and State Highway 48. With the construction of the Brownsville Ship Channel, it was disconnected to the Laguna Madre, and dried up as a result. After the completion of the project, it was reconnected and is a functioning wetland again after restoration began in 2005. Natural tidal flow started once the Bahia Grande was connected to the Little Laguna Madre and Laguna Larga. Many fish species live in this nursery, including the flounder, red and black drum, spotted seatrout, blue crab, and American oysters. In recent years, the restoration brought these species and more back to the Bahia Grande. Water birds are also another important part of the ecosystem, and their return marked the progress of restoration.

One class of fish within the Laguna Madre are the cartilaginous fishes, which include sharks, skates, rays, and chimaeras. The most common shark seen in the Laguna Madre is the Blacktip and is usually found in the surf zone and piers. It is found in both the Upper and Lower Laguna Madre, and populations rise when the Upper Laguna Madre is not as saline. These sharks are known to leap and can be seen twirling out of the water. Another shark that is common is the Atlantic Sharpnose, or the sand shark, and is found in bays, piers, and surf zones. Hammerhead sharks also make an appearance, with the Bonnetnose near Port Isabel. There are many ray species that include the Atlantic, Bluntnose, and Southern stingrays, along with the Cownose ray. The second class of fish is the bony fishes, which are the typical ones that include eels, herrings, anchovies, catfish, lizardfish, cods, minnows, seahorses, perch, yellowfins, porgies, drums, trout, gobies, flounder, and pufferfish.

The Upper Laguna Madre is known for having many black drum, red drum, and speckled seatrout. The Black drum had been affected negatively in 2012, as they faced an emaciation event. Many fisheries were recording underweight and emaciated black drum from the Baffin Bay region, leading many to be waste. Black drum is a commercial fish and is especially important in the Upper Laguna Madre. Their natural food source is unavailable to them because of the high salinity, so alternatives were given to them. These alternatives were unsuccessful at properly feeding the fish, leading to gelatinous fillets with reduced white muscle and the inability to sell the product. These fish found in Baffin Bay were underweight compared to the rest of the Upper Laguna Madre. The root problem came from the feeding behaviors of these fish, as they varied seasonally and ontogenetically. Over the next two years, the population stabilized, and the overall weight began to increase to normal levels.

Because the Laguna Madre is so unique, conservation of the land is a high priority. According to the World Birding Center, it is one of the first stops in cross-Gulf migration from Southern Mexico and northern Central America for some birds. The South Padre Island Birding and Nature Center has a land of 50 acres to keep this area fit as a stopping point for tanagers, thrushes, orioles, and warblers to visit every year. Because of the wetland environment, other endangered species can be found living in this area, such as the Brown Pelican, Peregrine Falcon, and Piping Plover. The Piping Plover is especially notable, because 20% of the world’s population of endangered Piping Plover are supported by the Laguna Madre. The center also has a boardwalk with bird blinds and a tower for people to bird watch and interactive exhibits to raise awareness.

The seagrass restoration has been a primary focus for the U.S. Army Corps of Engineers through programs that affect the “management of maintenance dredged material from the [Gulf Intracoastal Waterway] and mitigation for regulated permit actions” to reduce pollution and disturbing the environment. There is another form of conservation, which includes the creation or restoration of seagrass, which has not only been marginally successful but is also expensive. If the seagrass does take to the land, it can be years before they begin to function as part of the ecosystem.

With proximity to the Laguna Madre, we will undoubtedly have an impact on its ability to thrive. Many activities such as fishing and hunting can help keep the ecosystem balanced but overfishing and overhunting are major problems that are affecting the area. The Texas Parks and Wildlife Department issues licenses and sets a limit on the number of animals that can be bagged, but an increased population means the game wardens are stretched thinner every year. Some individuals go over the limit and can have lasting effects on the populations, leading to the loss of the resource in the future. Because of the boating in the area, propeller scarring, where the propellers of boats come into contact with seagrass beds in the bay and leave deep marks in the seagrass, is another issue that the Laguna Madre is faced with. When propeller scarring happens, there is a loss of habitat, decrease in water clarity, productivity, and carbon storage, and an increase in erosion. The U.S. Army Corps of Engineers has a program to educate the public about this issue.

Mentioned earlier was the Gulf Intracoastal Waterway, and it has undeniably had an impact on the surrounding area. It connects Brownsville, Texas to Okeechobee waterway in Fort Myers, Florida. It begins at the Brownville Ship Channel and extends 426 miles to Sabine Pass for the Texas portion. The main purpose of the waterway is to transport goods between the states along the Gulf of Mexico. This boosted the area economically and development began to improve the infrastructure. Commercial and resources goods are traded, including “crude petroleum and petroleum products, iron and steel, building materials, fertilizers, liquid sulfur, and other bulk products.” (Leatherwood). The project was financed by the federal government and constructed by the United States Army Corps of Engineers. To make this waterway, a vast amount of land was dredged to allow bigger ships to pass through the channels. 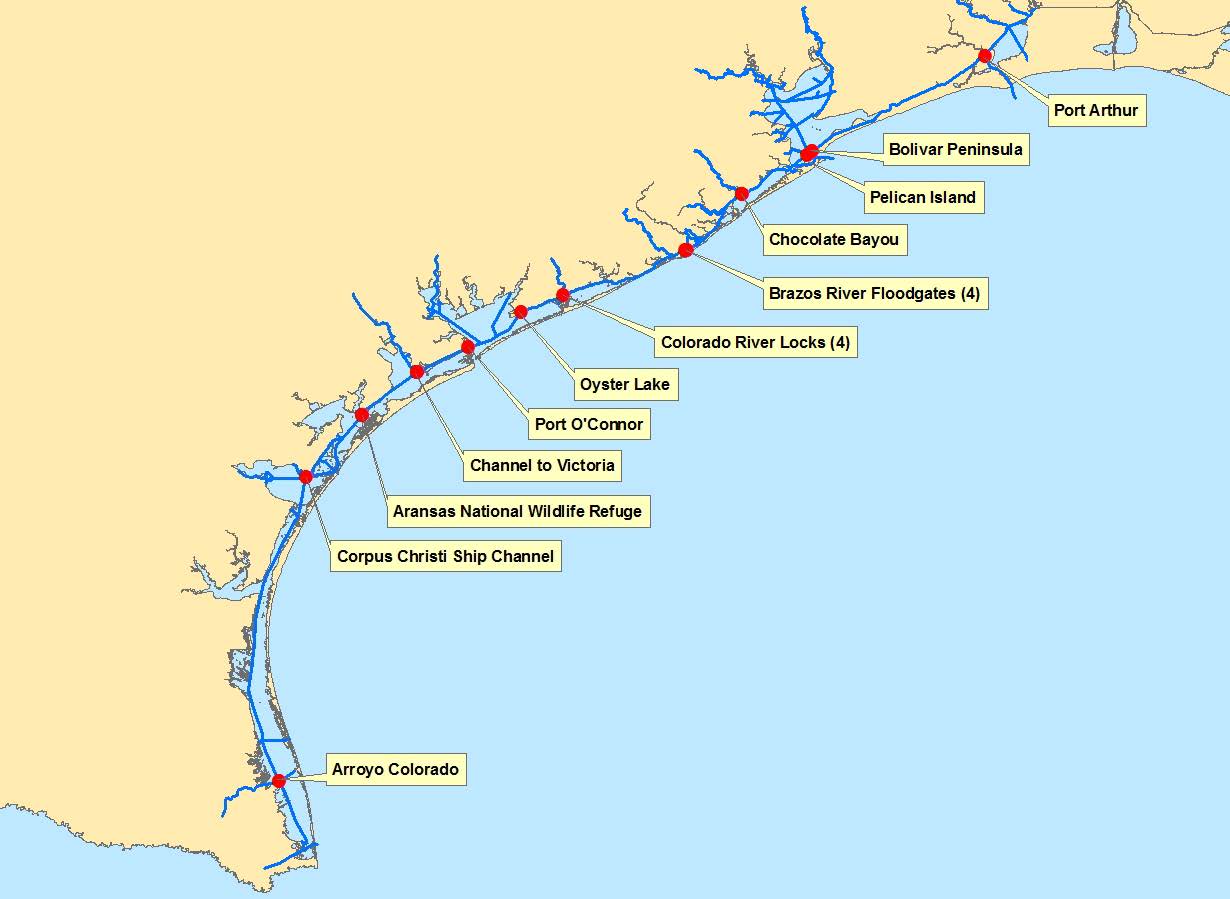 Source: Texas Department of Transportation. Map of mooring areas used by barge operators when it is unsafe to proceed along the waterway.

Michael Casanova is a senior from the University of Texas – Rio Grande Valley. He expects to graduate Summer II 2022 with a Major in Anthropology, with a Concentration in Archaeology, and a Minor in Geology and Earth Science. He has had many jobs over the past few years, but none of them related directly to his fields of study. One of his accomplishments was as an intern at the International Museum of Art and Science, where he created the Geology exhibit that is on display. He wishes to focus more on Geology as a field and he dreams of working with the Geological Survey of Sweden, Iceland GeoSurvey, or the Geological Survey of Norway.

Books & Articles from our Catalog