Farm Workers' Movement in the RGV

The Farm Workers' Movement in the RGV research guide provides links to resources from our library catalog and archival collections, relating to historic people and events in the labor movement of the Rio Grande Valley. This research guide aims to help students interested on researching farm work as it relates to labor and civil rights, including peonage, strikes, and unions. External resources and resources for educators are also included. 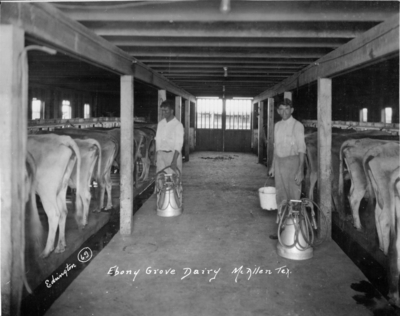 This collection consists of 53 photographs of agricultural activity in the Rio Grande Valley and the McAllen, Texas region, ca.1920. Four bear the "Ziebell, McAllen" studio name, six bear the "Eskildsen" name, and four have no studio identification marks.

La Casita and Starr County were the sites of other major episodes of labor and racial unrest in the mid-to-late nineteenth century, as well as in the 1930s and again in dramatic fashion in 1966-1967.

This folder documents a peonage scheme in Willacy County in the fall of 1926, in which many unwitting victims (primarily Mexican Americans) were arrested on false charges and forced to work the cotton fields. It also documents the related lynching of four ethnic Mexicans and an Austrian by an Anglo mob led by the Willacy County Sheriff, near Raymondville, and the legal proceedings that developed from these incidents.

The collection contains research material compiled by Holly Hewlett, pertaining to the 1966 La Casita Farms worker strike as well as the involvement of Archbishop Robert E. Lucey of San Antonio and the Catholic Church. The collection consists primarily of photocopies of newspaper articles, photocopies of records and correspondence, three oral history interviews on cassette tape, and Hewlett’s honors thesis presentation.

During his tenure as Chairman, Representative de la Garza successfully led the way for the House to pass three omnibus farm bills (1981, 1985, and 1990), a major overhaul of the agricultural lending system, Federal crop insurance reform, a major reorganization of the USDA, reforms in Federal pesticide laws, and numerous other measures to assist U.S. agriculture, encourage rural economic development, and improve human nutrition. In 1976 de la Garza became one of the founding members of the Congressional Hispanic Caucus, which he chaired from 1989 to 1991.

The Rio Grande Valley Oral History Collection consists of over 500 digitized oral histories recorded and collected by faculty, staff, students, and community members and donated to the University Library. Oral histories provide unique, and in many instances, otherwise unavailable written information, and as such provide valuable insight into life in the region, including immigration, military service, ranching, education, agriculture, border violence, sports, and much more. Interviews of note include:

Congressman Hinojosa has distinguished himself as an advocate for education, Social Security, health care, agriculture, veterans’ issues, economic development and infrastructure projects. The Congressional Papers of Rubén Hinojosa consists of 291 linear feet of materials dating from 1997 - 2016. The papers were created during Rubén Hinojosa's time as an elected official in the U.S. House of Representatives from 1997 - 2016, representing the 15th Congressional District in South Texas. The collection consists of legislative material as well as casework of local projects and issues.