The Brownsville Affair of 1906 was previously referred to as the "Brownsville Raid". Due to the recent reexamination of this historic event, and many like it in American history, the terms once associated with these events have changed due to restoration efforts over time. This does not mean that publications using previous titles should be considered undervalued. In fact, The Brownsville Raid, by John Weaver, set the foundation for revitalization efforts that challenged previous interpretations and is still largely cited by historians today.

Some materials in the collections and resources provided contain offensive and racist language and/or imagery, especially in depictions of African Americans and other people of color. These harmful and racist perspectives are not representative of the beliefs of the University, library, or staff. It is our hope that our research guide provides historical context rather than perpetuates negative positions, language, values, and stereotypes.

The purpose of this research guide is to provide a brief summary and background information on the Brownsville Affair while also preparing a list of sources to assist students, staff, and researchers in navigating this research topic. Resources include books, maps, photographs, newspaper clippings, videos, and links to externals resources and websites. Additional information for Mingo Sanders has also been included for further research.

On August 13, 1906, citizens of Brownsville, Texas alleged that African-American soldiers with the Twenty-fifth US Infantry at Fort Brown raided the city, resulting in property damages and the death of local bartender Frank Natus. As Garna Christian writes, "The Brownsville [Affair] occurred against a background of deteriorating Negro status: Texas in that same year ex- tended railroad segregation to streetcars, eliminated the black militia, and held the second all-white Democratic primary. The state witnessed over a hundred lynchings between 1900 and 1910, the third highest in the nation." Furthermore, hostility towards African Americans in the Valley had been escalating. In 1875 and 1899, violence erupted between  black soldiers of the Ninth (9th) Cavalry and white officers stationed at Fort Ringgold and white residents of Rio Grande City. The occupation of the U.S. military on the border, especially by African American troops, angered Brownsville's white residents.

Hours before the alleged raid in 1906, a white woman reportedly had been harassed by a group of black soldiers from the 25th regiment, which led Major Charles Penrose to confine all soldiers to their posts that day. That evening shots rang out in the town and local witnesses claimed the responsible parties were a group of Black soldiers from Fort Brown. Immediately after the shooting Maj. Penrose conducted a roll call of all soldiers and a weapons check--the record indicated that all men were present at their barracks that night and all their weapons were accounted for. A formal investigation was conducted by Maj. Augustus Blocksom whose research did not yield substantial evidence on who was responsible for the shooting. Without any proof of evidence, President Theodore Roosevelt dishonorably discharged 167 black troops of the 25th regiment. Six among them were Medal of Honor recipients.

The highest-ranking soldier to be dishonorably discharged was First Sergeant Mingo Sanders of the 25th US Infantry B Company. Sgt. Sanders was a distinguished career soldier who received combat experience in Cuba during the Spanish-American War, having served under Theodore Roosevelt's command. Sgt. Sanders was also a participant in the historic US 25th Infantry Bicycle Corps on their experimental 1,900-mile journey.

With the help of feminist and civil rights activist Mary Church Terrell, Sgt Sanders and Private Elmer Brown of the Twenty-fifth US Infantry were able to successfully reenlist into the military on December 12, 1906. Despite widespread public criticism immediately following the unjustified conviction of 167 soldiers, serious reexamination of this incident did not occur until 66 years later after the publication of John D. Weaver’s, The Brownsville Raid, in 1970. In 1972 the Army reversed the conviction citing that the events following the Brownsville Affair were not committed at the hands of the Twenty-fifth US Infantry finally validating their innocence in the historical record. 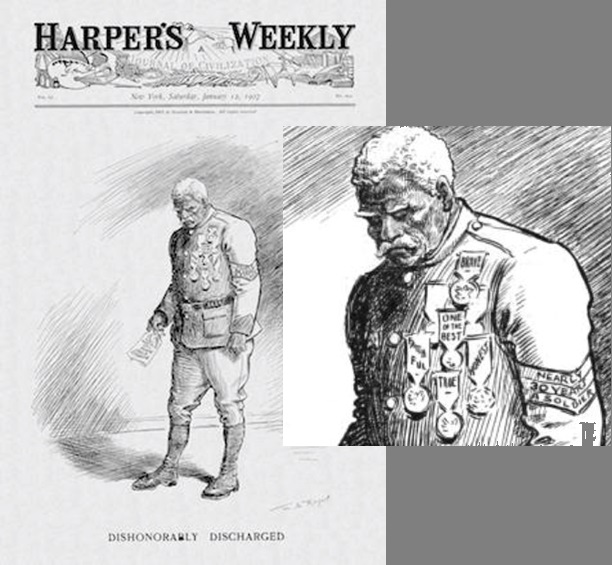 A cover of the Harper's Weekly magazine, featuring a black and white drawing of Mingo Sanders with his head down holding a piece of paper. At the bottom of the cover are the words 'Dishonorably Discharged.' Next to the full cover is a closeup of Sanders' head and torso, with the writing on the medals and arm-band legible. The writing reads 'One of the best' and 'Nearly 30 years a soldier'. 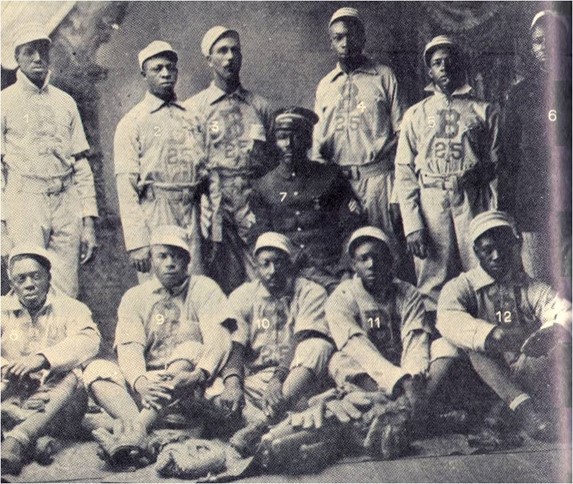 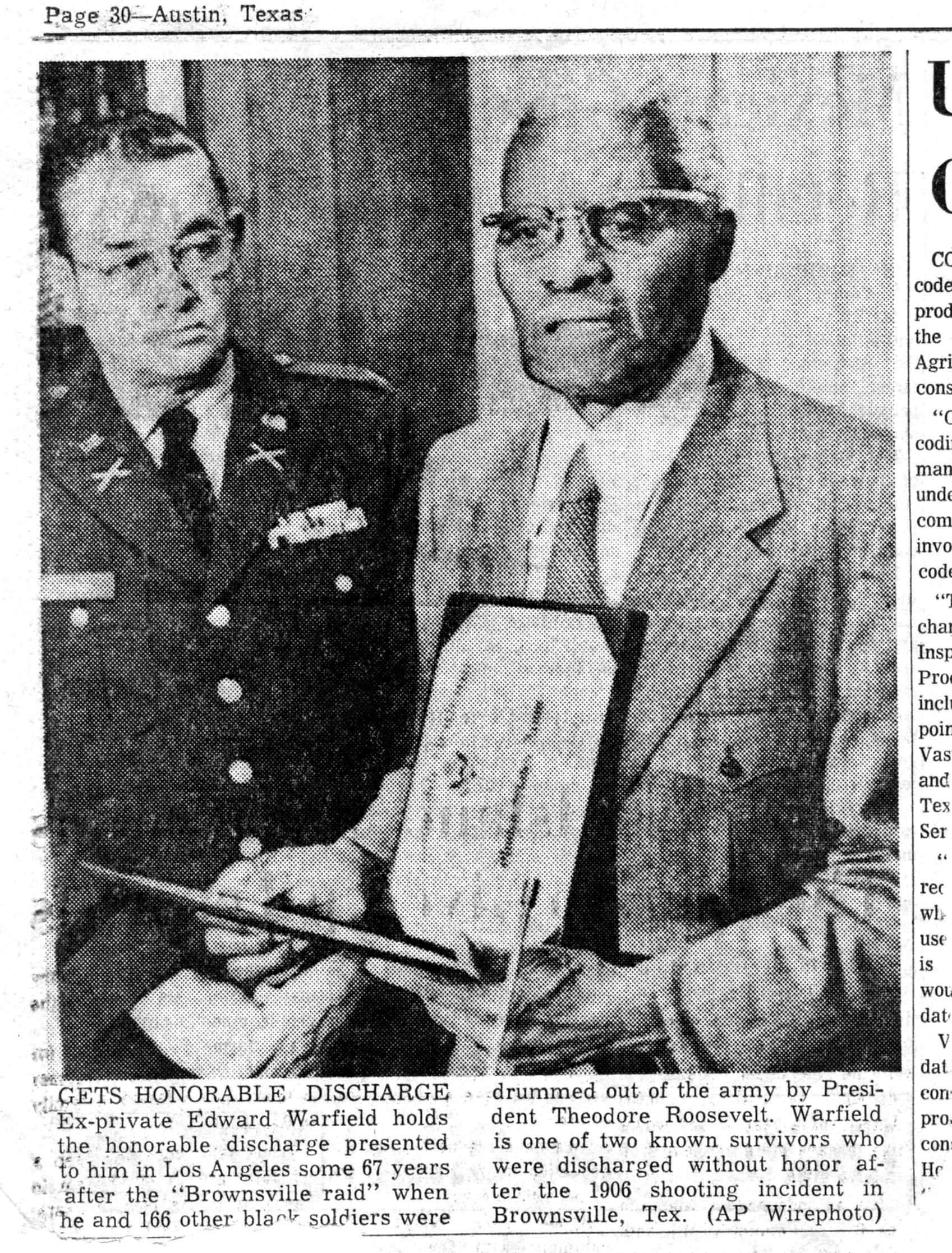 1973 AP Wirephoto and news clipping of Edward Warfield receiving an honorable discharge from the military 67 years after the Brownsville Affair. 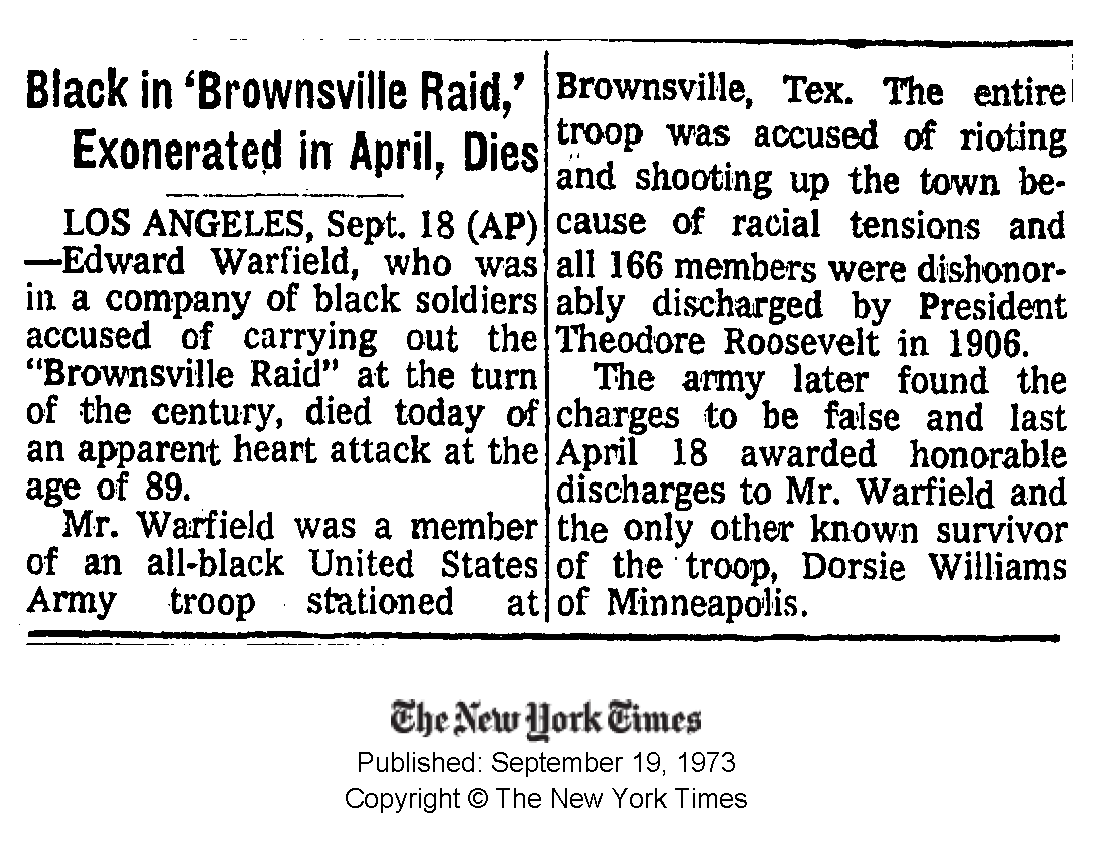 "Edward Warfield, who was in a company of black soldiers accused of carrying out the "Brownsville Raid" at the turn of the century, died today of an apparent heart attack at the age of 89."

Note: Dorsie Willis (not Williams) was the sole survivor. 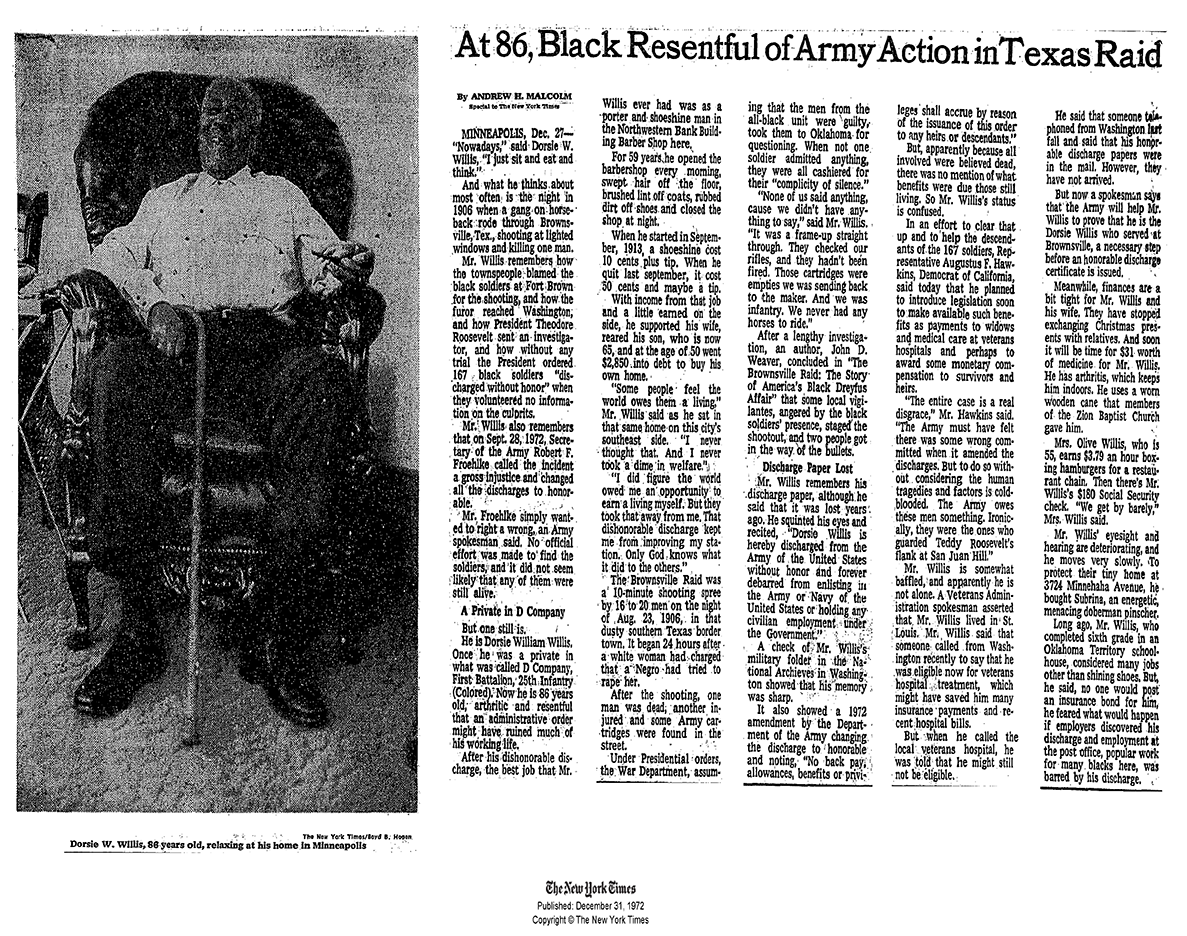 At 86, Black Resentful of Army Action in Texas Raid

Ex-Soldier Was Last Survivor of Brownsville Incident in 1906

MINNEAPOLIS, Aug. 24 (AP) Dorsie W. Willis, the last survivor of a company of black soldiers that the Army discharged without honor in the Brownsville Incident of 1906, died today. He was 91 years old. 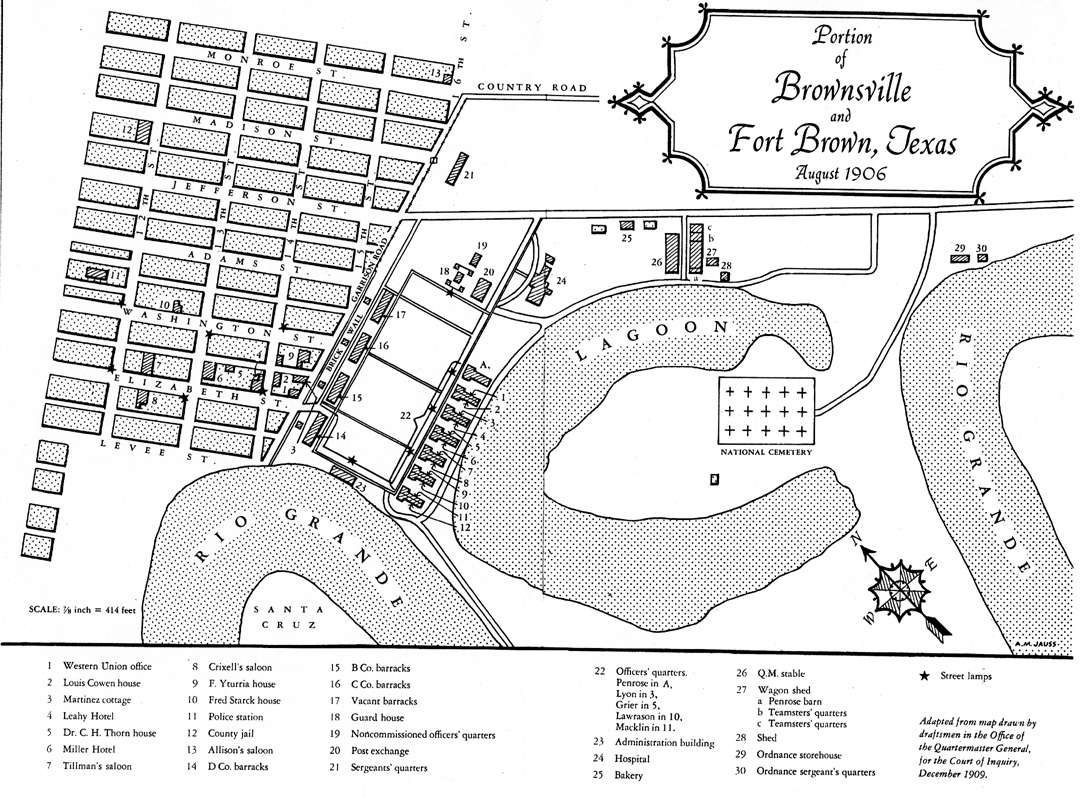 Map of Brownsville Affair of 1906

"Adapted from the map drawn by draftsmen in the Office of the Quartermaster General, for the Court of Inquiry, December,1909". This map includes the houses of people involved in the incident, local businesses, and Fort Brown. From the 1970 book written by John Weaver, The Brownsville Raid. 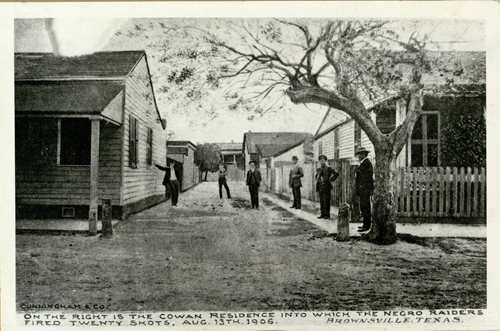 Postcard of Cowan residence featured on Page 12 of the John R. Peavey Scrapbook

Cunningham & Co. postcard inscribed, "On the right is the Cowan residence into which the negro raiders fired twenty shots, August 13th 1906 Brownsville, Texas" 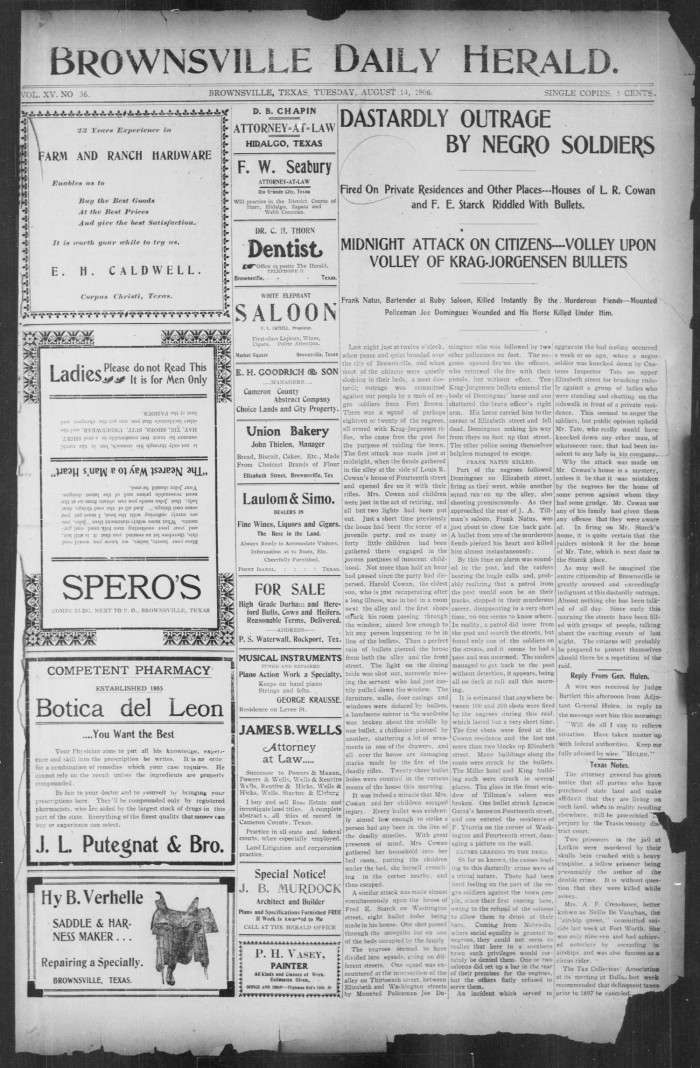 Citizens of Brownsville rushed to judge the newly arrived Black servicemen despite later accounts that all soldiers were present and accounted for the night of the alleged incident. "Dastardly Outrage by Negro Soldiers." Brownsville Daily Herald (Brownsville, Tex.), Vol. 15, No. 36, Ed. 1, Tuesday, August 14, 1906. University of North Texas Libraries, The Portal to Texas History, https://texashistory.unt.edu; .

See also the blog "Riders of the Bicycle Corps" for the transcription of the Washington Post article: http://bicyclecorpsriders.blogspot.com/2009/01/mingo-sanders.html 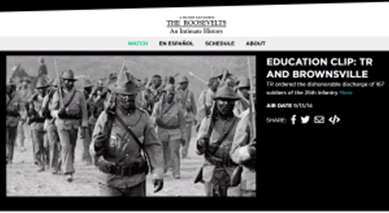 PBS Documentary on the Bicycle Corps