While UTRGV Special Collections & Archives is tasked with access and preservation of our collections, we do not approve, endorse, or support the attitudes, prejudices, or behaviors found among these materials. Furthermore, we recognize materials contain offensive and racist language and imagery, especially in depictions of Mexican and Mexican-American people. This research guide attempts to avoid perpetuating inherent bias, power, and racism and promotes the researcher's candid evaluation and interrogation of the historical record.

The Mexican Revolution was a complicated transformation of Mexican society and politics that lasted from November 1910 to May 1920. The country broke up into competing factions initially to overthrow longtime dictator Porfirio Díaz. After Díaz resigned in May 1911 due to increased threats of violence against his regime, Francisco I. Madero was democratically elected to the position of president. However, once it became clear that Madero was not going to politically appoint or appease his supporters with changes such as land redistribution, revolution again ensued; Madero was ousted in a coup de tat in February 1913. Francisco “Pancho” Villa, Emiliano Zapata, Pascual Orozco, Venustiano Carranza, and other revolutionaries and politicians continued to define the rest of the decade until Álvaro Obregón was elected as president in 1920.

Source: The Mexican Revolution and the United States in the Collections of the Library of Congress

Impacts on the RGV 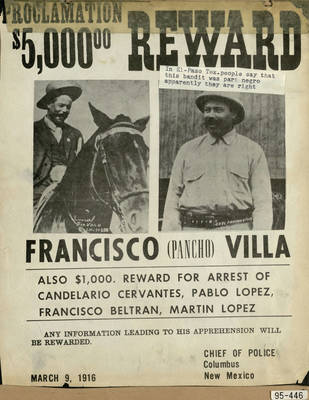 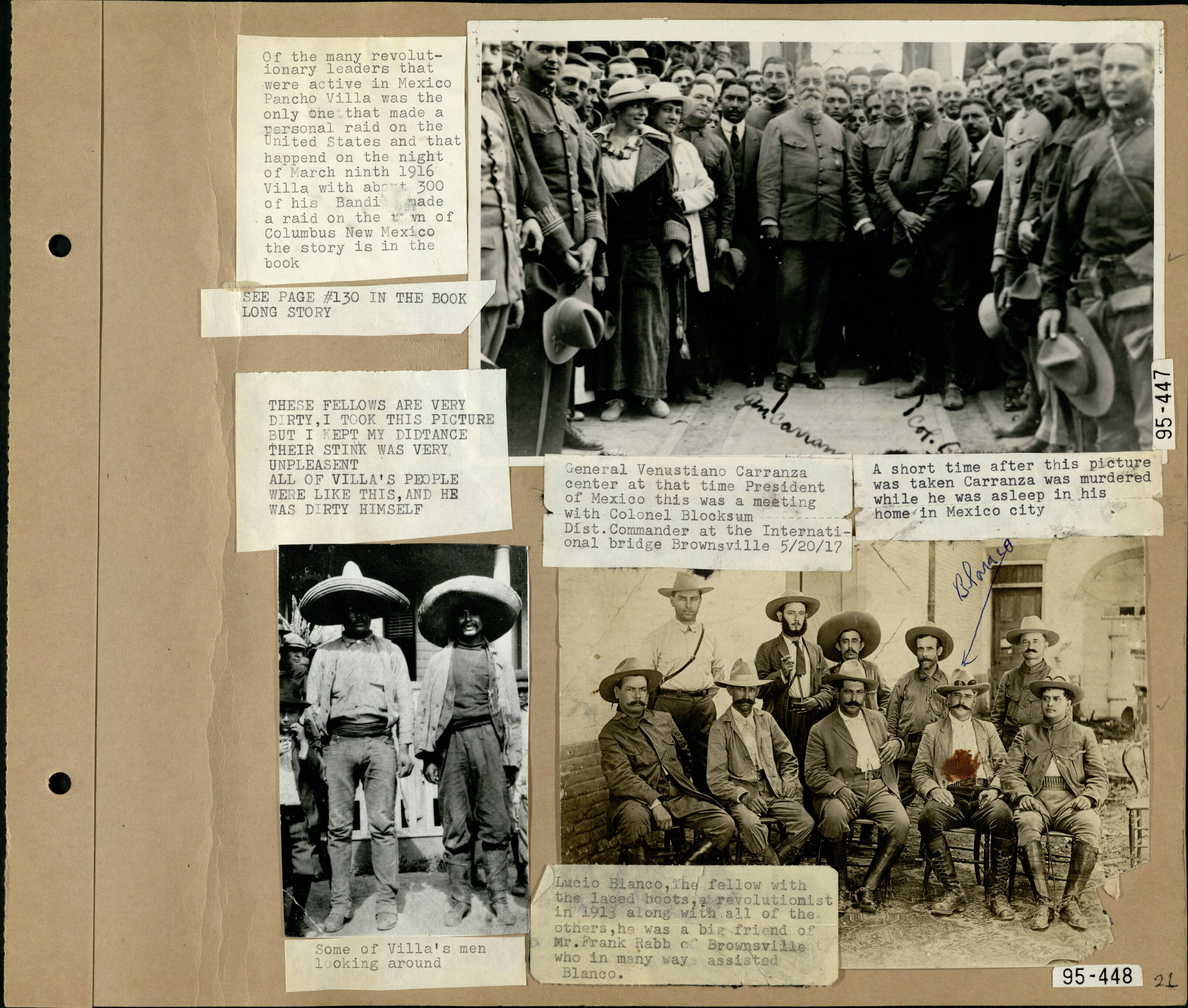 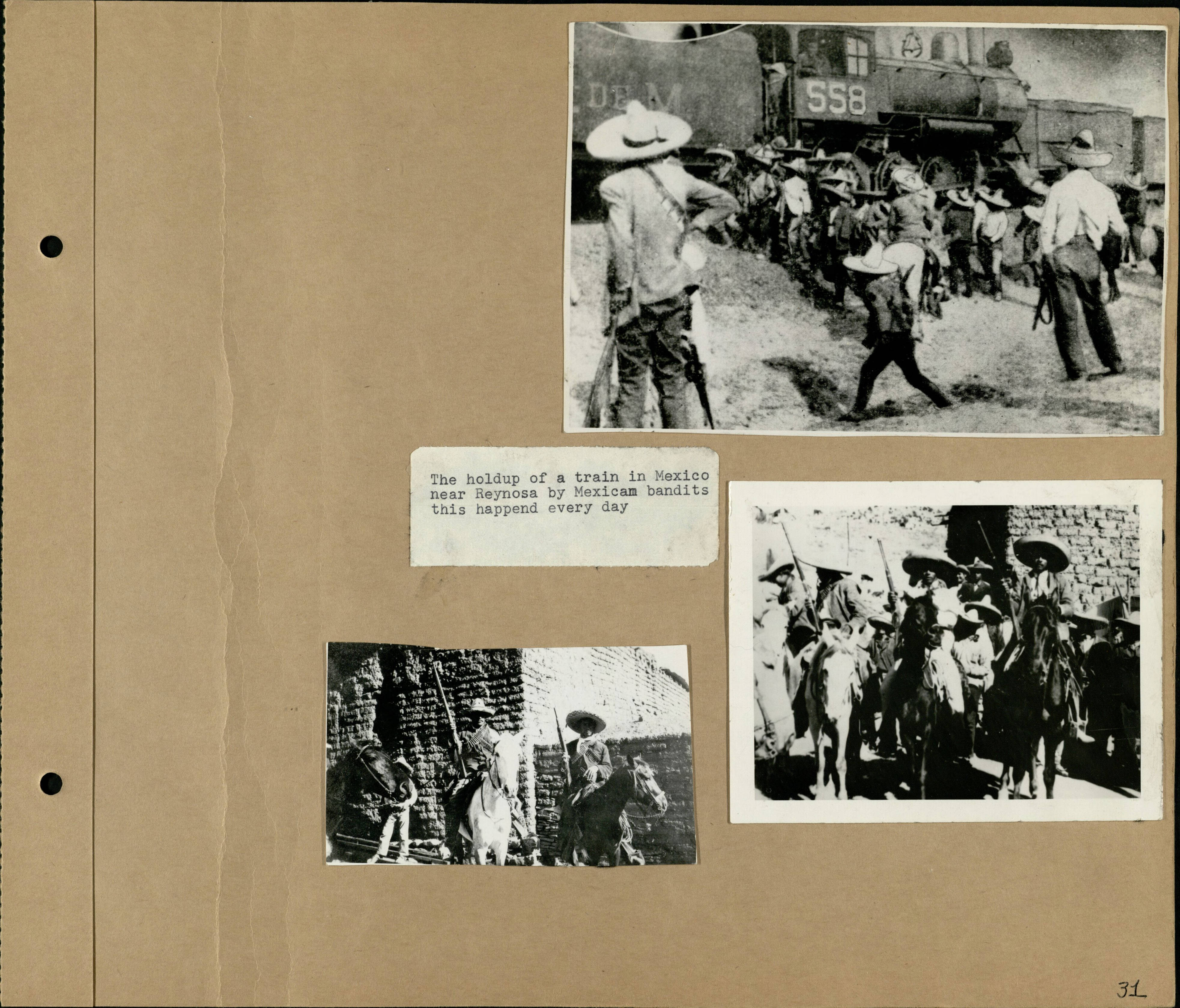 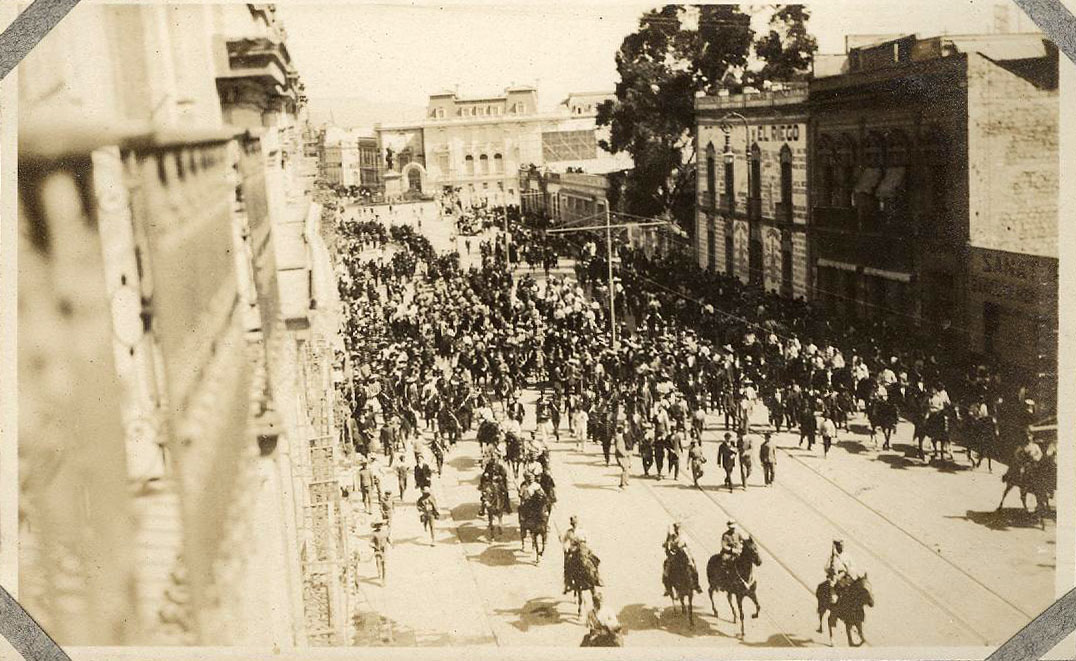 Black and white photograph. Mexican army soldiers on horseback riding through the streets of either Mexico City or Tehuacan, Mexico. 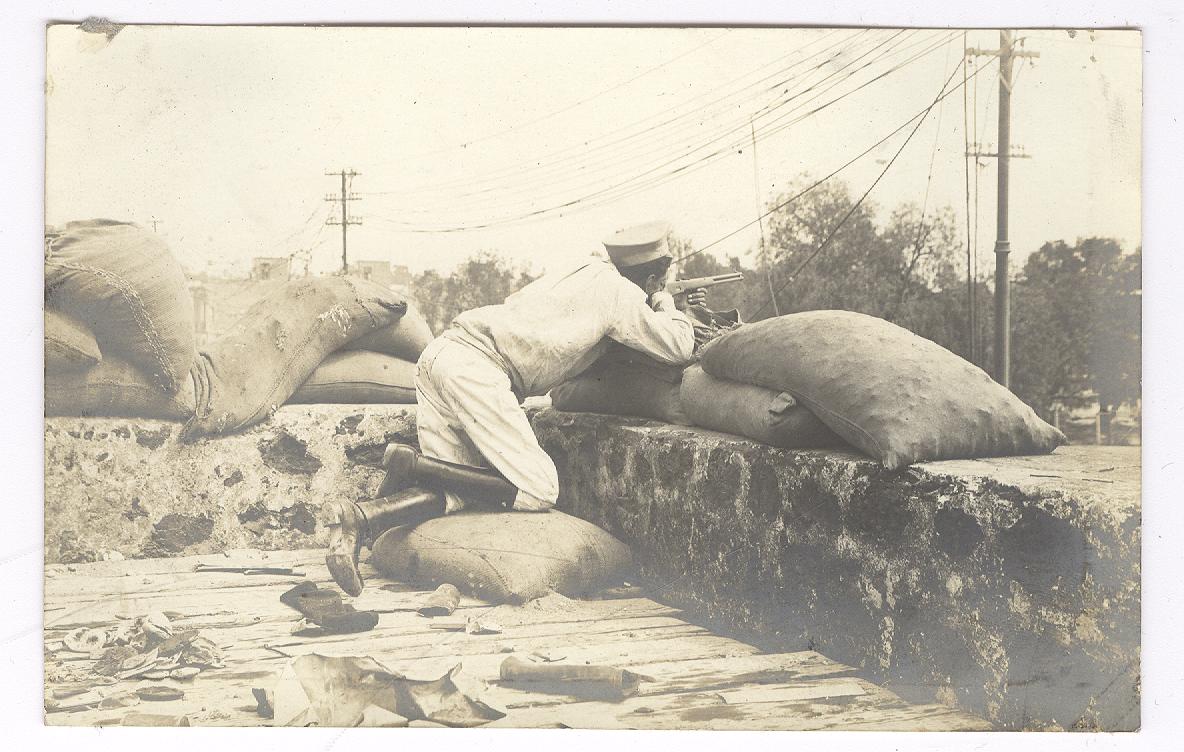 Black and white photograph. Soldier kneeling and waiting with a weapon in a foxhole. From Cheryl Shepherd's Ten Tragic Days Collection. 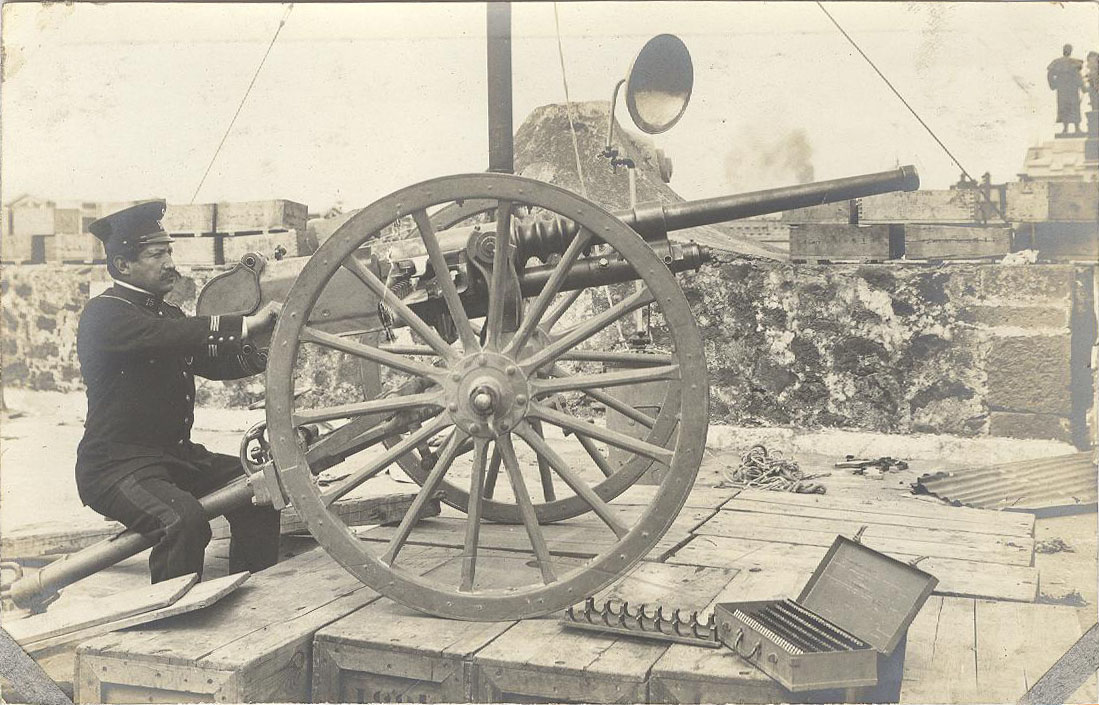 Black and white photograph. Soldier using a cannon during the Mexican Revolution on what appears to be a fort. 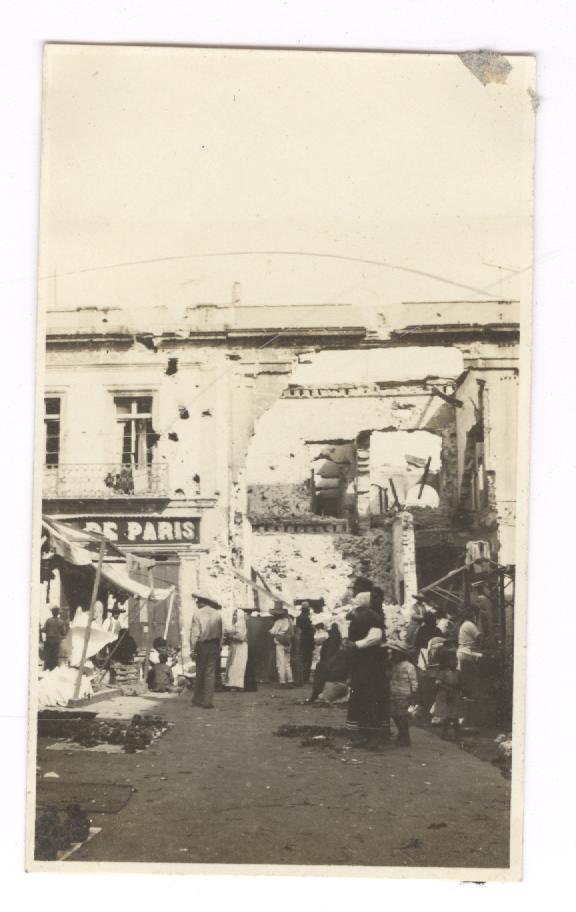 Ruins of buildings left behind from the Mexican Revolution (1913)

Black and white photograph. Ruins of a two-story building in Mexico City. An outdoor market is directly in front of the ruins.

The collection consists of photographs pertaining to the Ten Tragic Days (La Decena Trágica) of the Mexican Revolution collected by the grandfather of Cheryl Hollis Shepherd while living in Mexico City.

Scrapbook of John R. Peavey reflecting his days as a U. S. Border Patrolman in the Rio Grande Valley, includes notable people and events from the Mexican Revolution. Warning: graphic content. For more materials of the John Randall Peavey Collection, view the Finding Aid on ArchivesSpace.

This collection includes a pamphlet outlining the command structure of the U.S. Naval forces involved in the 1914 Tampico Affair during the Mexican Revolution. The pamphlet contains the autographs of 25 naval participants, including Congressional Medal of Honor recipients Read-Admiral, later Admiral, Frank Friday Fletcher (1855-1928) and Lieutenant (j.g.), later Admiral, Jonas H. Ingram (1886-1952). There are also fleet orders in broadside format, from USS Arkansas, dated April 26 and May 4, 1914, at Veracruz, Mexico, both signed by Rear-Admiral Badger. "Official Signal" document from May 3, 1914, concerning the departure from the fleet of the USS Montana and an article from the Mexican Herald on April 28, 1914 titled "American Flag Floated above Veracruz Port".

The Tampico Affair relates to the US occupation of Veracruz and occurred when nine naval soldiers were arrested for trespassing into Tampico, Mexico. U.S. Naval Commander Admiral Henry Mayo, supported by President Wilson, argued that Mexican President Victoriano Huerta needed to punish those who arrested the U.S. Naval soldiers, as well as perform a 21-gun salute for the American flag in Mexican territory. Wilson received congressional permission to invade the Veracruz port that same year since the Mexican government did not follow U.S. demands, and this led to the overthrow of Huerta. Learn more from Britannica.

The text of this House Resolution can also be read online via https://www.congress.gov/bill/111th-congress/house-resolution/1604/text

Alexandro Gomez, born in 1909, discusses what it was like to live through the Mexican Revolution. This interview was conducted in 1987 and recorded in Spanish.

Peavey’s experiences as a member of law enforcement in relation the Mexican Revolution are discussed throughout entire interview. Topics such as the Bandit Wars (and Peavey’s direct involvement in them), Carrancistas, and the Tampico Affair are discussed. This interview was conducted in December 1981 and recorded in English. There are a total of 9 parts of Peavey’s oral history interview.

Juan Gomez was born in 1900 in San Luis Potosi, Mexico. This interview was conducted in 1986 and recorded in Spanish. Gomez discusses his experiences during the Mexican Revolution and life in Texas.

Manuela Barrios, born in 1888, discusses the Mexican Revolution and her family life in Matehuala, San Luis Potosi, Mexico. This interview was conducted in in 1987 and recorded in Spanish.

Streaming video for Mexican Revolution includes eight videos relating to the revolution and notable figures like Pancho Villa and Zapata.

The Revolution Timeline (Part 1) from The Children of the Revolución on Vimeo.