This research guide provides information on the descendants of Nathaniel Jackson in the Rio Grande Valley. The purpose of this research guide is to introduce researchers and students to Jackson family primary and secondary sources within UTRGV Special Collections and Archives.

The Jackson family established their roots in the Rio Grande in the 1850s when Nathaniel Jackson along with his African-American wife, Matilda Hicks, son Eli, and other adult children left Alabama. The family was also accompanied by 11 African-American freedmen.

The Jackson Ranch (est. 1857) and Eli Jackson Cemetery (est. 1865) are located along the Rio Grande River in Hidalgo County, Texas. The Jackson Ranch is located near the Military Highway in an area between Fort Ringgold and Fort Brown. The ranch not only represents one of Hidalgo County's earliest agricultural communities, but also one of the earliest African-American and mix race communities in the region. Its historical significance predates the U.S. Civil War and remains relevant today.

Nathaniel Jackson (1800-1865): Patriarch of the Jackson family, made his way to the Rio Grande Valley with his wife Matilda, and their children Lucinda, Columbus, Eli, Matilda, Bryant, Martin, and John. Nathaniel purchased Porcion 71 from E.D. Smith, which consisted of 5,535 acres located between Pharr and San Juan. He constructed his ranch home and a chapel (Methodist minister). His ranch was a haven for people in need, and as a result he was liked by all.

Matilda Hicks Jackson (c. 1801 ~1870): As an African-American born into slavery, Matilda, was not legally married to Nathaniel despite living in the same household and bearing his children.

Martin Jackson: Son of Nathaniel Jackson who is known for giving a portion of land to build the first Methodist Episcopal Church. He died in 1913.

Columbus Jackson: Son of Nathaniel Jackson, is recorded as being the first to be buried in Jackson Methodist Church Yard in 1896.

Matilda Jackson Clark: Daughter of Nathaniel Jackson, is recorded for being the second to be buried in Jackson Methodist Church Yard. She      also had a daughter named Frances.

Eli Jackson (1832-1911): Son of Nathaniel Jackson, he built his home near the church. Eli was appointed Hidalgo County Commissioner in 1869 and was later elected in 1890-1893. When Nathaniel Jackson passed away, he inherited the land and kept it as a haven for people in need. He married Elizabeth Kerr in 1877 and had nine children. Their names were Alice Jackson, Robert Jackson, Angeline Jackson, Nathaniel "Polo" Jackson, Matilda Jackson, Elmira Jackson, Amanda Jackson, and Amelia Jackson.

Nathaniel "Polo" Jackson (1875-1929): Son of Eli Jackson and Elizabeth Kerr, was a Hidalgo County Jailer approximately 1900-1929. He inherited Eli's Ranch when he passed, and continued to farm the land. He married Eugenia Villanueva in 1907 and had five children one of which was adopted. Their names were Adela Jackson, Angelita Jackson, Federico Jackson, Herlinda Jackson, and Audelia Jackson (adopted in 1925). In 1929 Nathaniel "Polo" Jackson was buried in Eli Jackson Cemetery where his son Federico had been previously buried. Eugenia joined him in 1948.

Federico Jackson (1893-1920): Son of Nathaniel "Polo" Jackson, was buried in Eli Jackson Cemetery when he was killed for refusing to sell his land.

Adela Jackson (1899-1992): Eldest daughter of Nathaniel "Polo" Jackson, worked on her father's ranch. She married Wuenceslao Reyna in 1927 and had three children.

Opinion in regard to State of Title of Porciones 71 and 72, 1905-01-03, Container: 39, Box: 1, Folder: 10. University of Texas Rio Grande Valley Special Collections and Archives, Edinburg Campus. https://archives.lib.utrgv.edu/repositories/2/archival_objects/80724 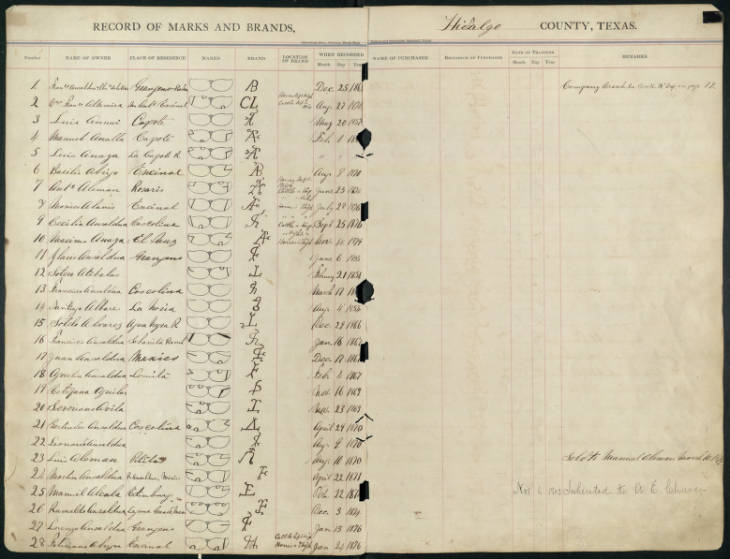 Page from Hidalgo County Marks and Brands - Book C, showing registration for Nathaniel Jackson and his cattle brand on July 27, 1857, 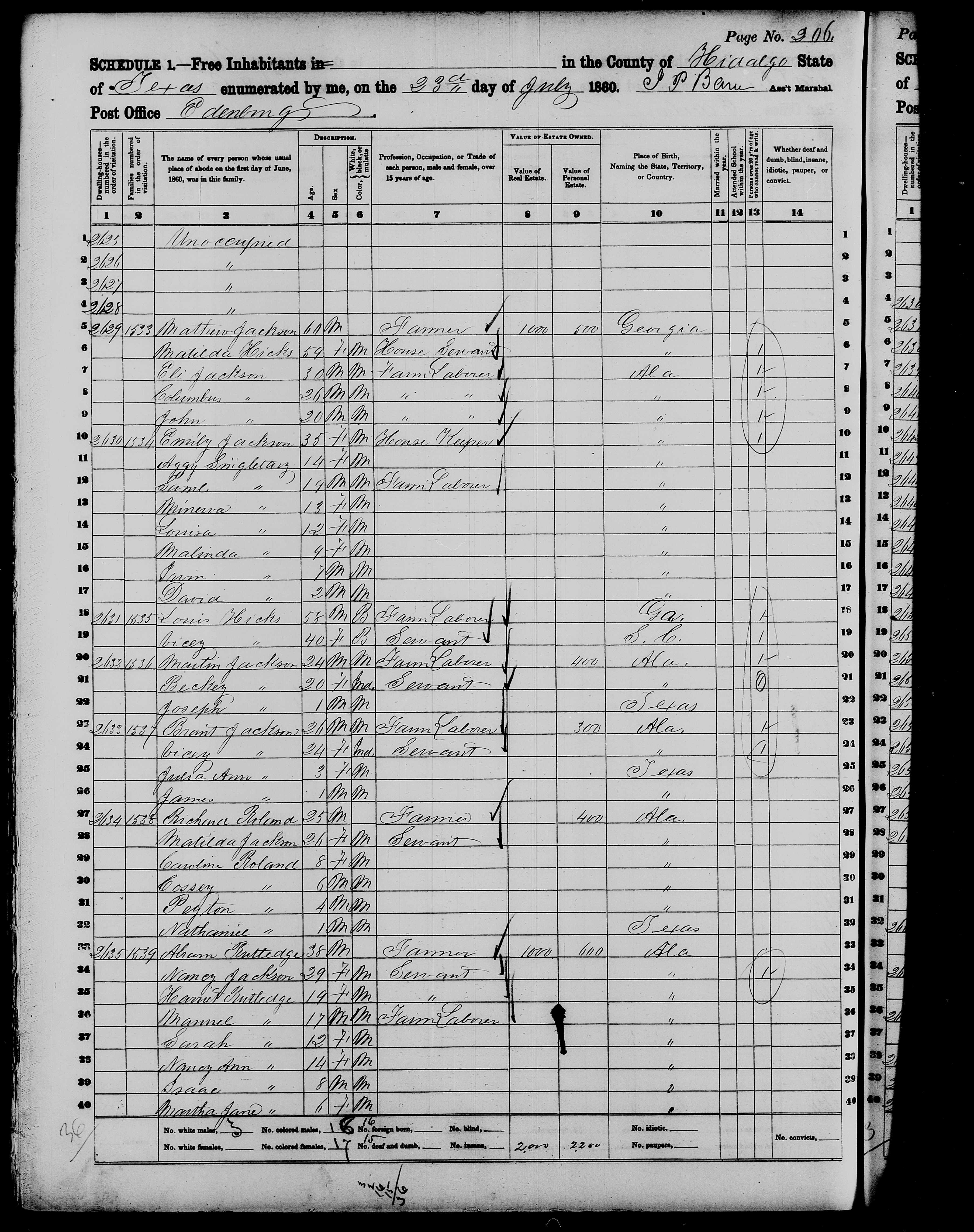 Members of the Jackson Family appear in the 1860 U.S. Census (available online via FamilySearch.org). Note: Matilda Hicks is listed as a "House Servant".

From the John Closner and Family Collection, folder contains 1) envelope and 2) handwritten document detailing the Warranty Deed from Eli and Martin Jackson to John Closner, including official recording with Hidalgo County Court signature and embossed seal. 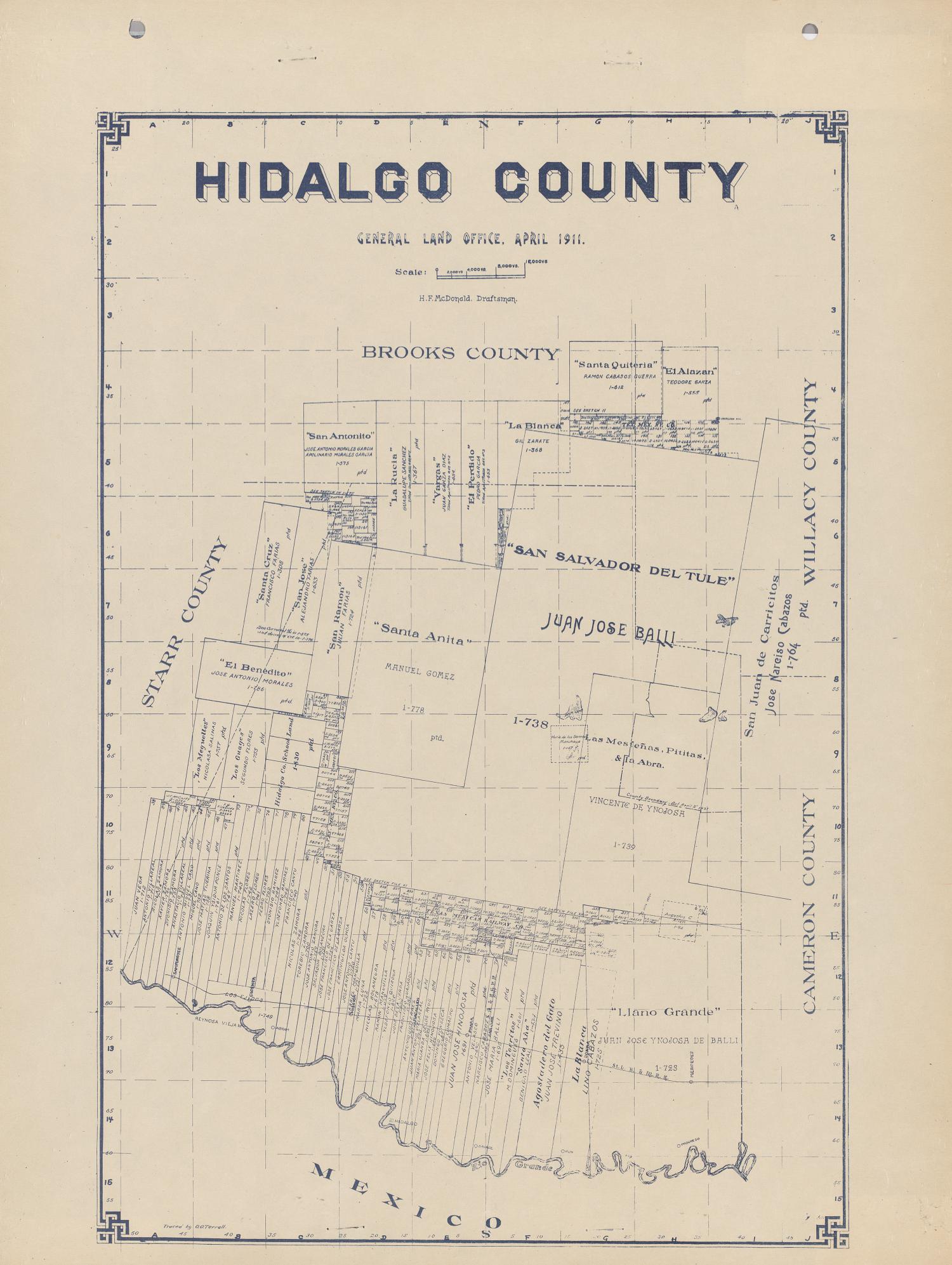 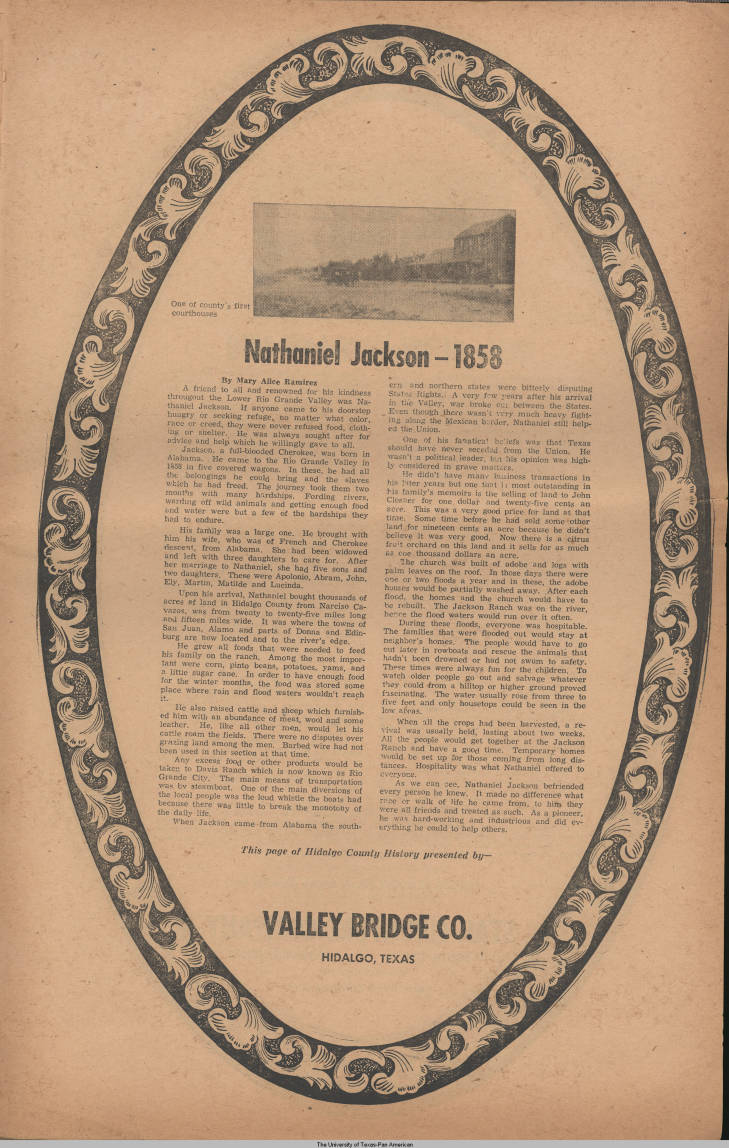 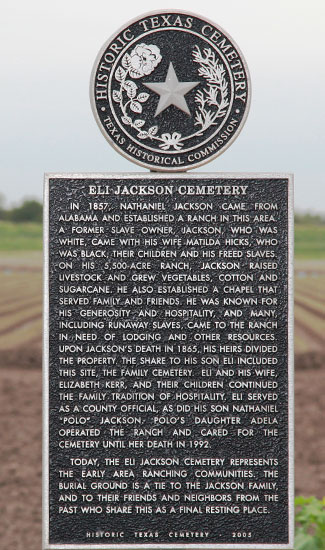 Location: (From Cemeteries of Texas): Drive south of Pharr on U.S. 281 to Fay’s Corners, where 281 turns east. Stay on 281 and go east .8 mile, then turn south and cross the canal levee; go .4 mile, turn east toward church spire .2 mile. Cemetery is 500 feet northeast of the church, against the canal embankment. 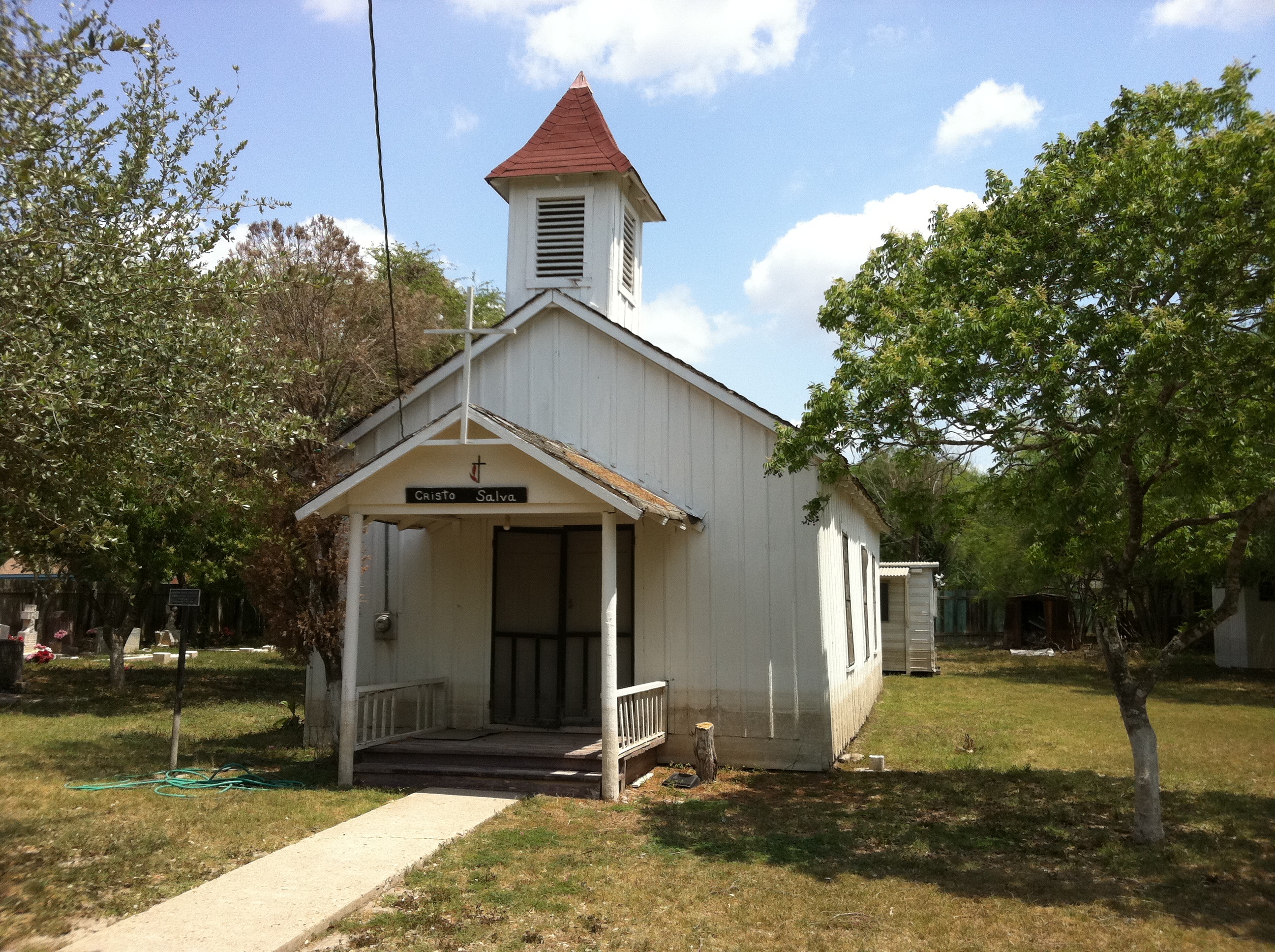 "This fellowship was founded in 1874 by the Rev. Alexander H. Sutherland (1848-1911), an early Methodist missionary, on Juan Manuel de La Vina's El Capote Ranch. In 1883 the congregation began meeting near this site on the Jackson Ranch when owner Martin Jackson donated the land. He later built a small chapel for their use. In 1910 most of the church members moved to the new city of McAllen, and only a few families continued to worship here. As one of the first Protestant congregations in Hidalgo County, this church has continued to serve area residents. (1983)"

Manny Rodriguez is a Library Associate with UTRGV Special Collections & Archives. He joined the University Library in 2015 as a student worker and later as a full-time member of the team. Manny earned a Bachelor of Arts in Anthropology & History from UTRGV in 2016. He is currently pursuing his Master of Library Science from Texas Woman’s University.