Born in Edcouch, Congressman Hinojosa graduated from Mercedes High School and earned his BBA from the University of Texas in Austin (1962) and his MBA from University of Texas-Pan American (1980). Prior to his being elected to the House of Representatives, Congressman Hinojosa served twenty years as President and Chief Financial Officer of a family-owned food processing company, H&H Foods.

During his time in office, Congressman Hinojosa served on two House Committees: Education and the Workforce; and Financial Services. He was also Co-Chair of the Democratic Caucus Education Task Force.

Congressman Hinojosa distinguished himself as an advocate for education, Social Security, health care, agriculture, veterans’ issues, economic development, and infrastructure projects. He demonstrated his ability to serve as a bipartisan consensus builder when he helped in the fight to create an emergency relief package providing $25 billion over a four-year period for farmers and ranchers who suffered devastating losses due to natural disasters from 1998 through 2001.

Hinojosa was also instrumental in expanding local access to quality health care for South Texas veterans. For the first time, inpatient services (including surgery) are available at approved hospitals in Hidalgo and Cameron Counties, eliminating 80% of the need to travel to San Antonio. Hinojosa also worked with Veterans Administration to establish primary care community-based outpatient clinics in the cities of Alice, Beeville, Kingsville and Uvalde. Hinojosa also worked with state legislators to secure a U.S. / State Veterans Memorial Cemetery in South Texas.

Congressman Hinojosa’s lifetime commitment to education on the local, regional, state and federal levels has created opportunities for all students to pursue higher education. His Education Committee assignment, as well as his appointment to chair the Congressional Hispanic Caucus Education Task Force, were critical to the success of his first major legislative initiative entitled “The Higher Education for the 21st Century Act.” This bill secured an increased authorized funding level of $69 million for Hispanic Serving Institution (HSIs); enhanced visibility of HSIs within the Higher Education Act; relaxed the restrictions for institutional eligibility for HSI designation; and improved the ways and financial mean by which HSIs strengthen curriculum development, academic instruction, mentoring, and college libraries.

As a former member of the Small Business Committee, Hinojosa increased access to capital and loans for small businesses; removed tax and regulatory burdens; and promoted business growth and opportunity in economically depressed areas through the new and improved Small Business Administration programs. He also led the successful effort to create a Womens’ Business center at the University of Texas-Edinburg.

Not only has Congressman Hinojosa made his mark in Washington, D.C., but he also brought Washington to South Texas. He invited and hosted many high-profile leaders to the 15th Congressional District to speak directly with residents about their needs and concerns. Among them were President Clinton, Vice-President Al Gore, Secretary of Agriculture Dan Glickman, Secretary of Commerce William Daley, Secretary of Education Richard Riley, Secretary of Labor Alexis Herman, Secretary of Veterans Affairs Hershel Gober, Small Business Administrator Aida Alvarez, House Minority Leader Richard Gephardt, and the Congressional Hispanic Caucus. Congressman Hinojosa also accompanied President Clinton as a member of various trade and commerce delegations to Mexico and South America (1997-2000).

Source: Adapted from the Biography of Congressman Rubén Hinojosa via the History, Art, and Archives of the US House of Representatives. 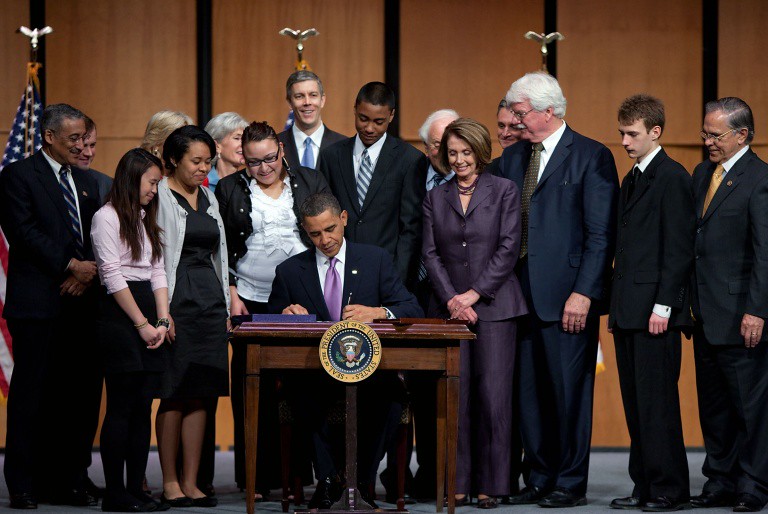 The Congressional Papers of Rubén Hinojosa consists of 291 linear feet of materials dating from 1997 - 2016. The papers were created during Rubén Hinojosa's time as an elected official in the U.S. House of Representatives from 1997 - 2016, representing the 15th Congressional District in South Texas. The collection consists of legislative material as well as casework of local projects and issues.

Mr. Speaker: I rise in strong support of this resolution. Yesterday our shores, our security and our sense of ourselves as a nation suffered a villainous, cowardly attack -- a blatant act of war that demands a commensurate response.

Innocent American men, women and children in civilian, hijacked aircraft were used and converted into the very deadly missiles that destroyed thousands of innocent people in our country’s most important centers of military and economic enterprise. The terror of those moments cannot cow us, they must only serve to "steel" and solidify our resolve.

From the stretches of the Rio Grande to the reaches of the Great Lakes, from the shorelines in the Pacific to every skyscraper on our Eastern shore, compassionate and disciplined American men and women will do what is necessary: search for survivors in the rubble at New York’s World Trade Center and the Pentagon in Washington, D.C., care for our wounded, volunteer to donate blood, reach out and comfort the grieving, ensure our school children of their safety, and do our nation's business in state and federal government buildings, banks, fields and factories.

The quiet determination of American resolve will grow. The message and the action must be clear. America is a nation of law and the lawless terrorists behind this attack on our nation must be punished and brought to their knees.

America is a nation of peace, but peace will be defended from those who make war. We have the intelligence, the technology and the will to pursue our enemies and put an end to their illusions of invulnerability.  We will find them!

Our thoughts and prayers go out to Americans who lost their loves ones in yesterday's horrific attacks.  I support the nine points of our House Concurrent Resolution.

Resources from Our Catalog